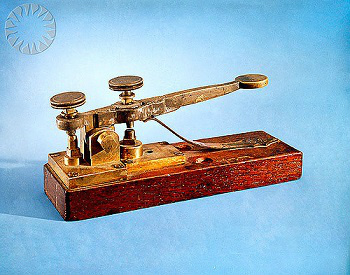 The story, Ray's Violet, includes Morse code as part of  the story.  Violet, the purple lightning bug, seems to communicate with the boys, Ray and Adam, using the Morse code alphabet.  This helps the reader learn more about it.

What is Morse Code?

LOL! BFF! IDK! Think about how convenient it is to send a text message. With the typing of a few letters on a mobile device, you can send a message for someone else to read. Well, long before there were cell phones and text messages, there were telegraphs and Morse code.

Morse code is a communication system that represents the alphabet and numbers with a series of dots, dashes or a combination of both. The dots are the short sounds and are also known as dits. The dashes are the long sounds and are also known as dahs. Because you can also tap out the dots and dashes, Morse code can be both seen and heard.  (www.study.com)

Can you guess who created Morse code? His name was Samuel Morse (go figure) and he created the code in the 1830s in response to the invention of the telegraph, which he also created. The telegraph was a machine that sent and received messages by sending electric currents on a wire. By using a series of electrical pulses, short bursts of electric energy, the telegraph could then make marks on a piece of paper. But, those marks would not mean anything without a code - thus, Morse code was born.  Morse code isn't used very often today. After all, it does take quite a long time to spell out words. However, it is still used sometimes by radio operators, the military and even the Boy Scouts.(www.study.com)

FOR MORE INFORMATION, GO TO:   http://aa9pw.com/morsecode/morse_code_alphabet/

Lovely author’s site Sharon! And what a nice bio in the People’s newsletter.